Why Every Pet Care Franchise Should Foster a Dog Colleen Tracey-Shaver knew this day would come. Ever since her doggy day care team at Hounds Town – Garden City began fostering two sweet rescue dogs named Coyote and Bobby, she knew it wouldn’t be long before two families swooped them up into furever homes. And Tracey-Shaver wouldn’t have it any other way. One of the key initiatives for the Hounds Town USA franchise is to help at-risk shelter dogs get socialized. Once the dogs feel confident and comfortable, they stand a much better shot at getting adopted by loving families.

After several months of working with the pups, Coyote was adopted almost immediately at the Town of Hempstead Animal Shelter. A few months later, Tracey-Shaver is saying goodbye to her beloved Bobby too, who has finally found his furever home.

WHY FOSTERING MATTERS FOR FRANCHISES

Hounds Town USA encourages its franchisees to connect with local rescues when they open a daycare in a new community. With the franchise’s superior training methods (pioneered by founder Michael Gould) and socialization opportunities, the pet care franchise provides dogs with the skills to thrive. “I think fostering is a 100% good idea,” says Tracey-Shaver. “It is rewarding for so many reasons. The dogs are loved, played with, and gain so much more confidence while they’re here. It’s an amazing transition to watch.” Hounds Town President Jackie Bondanza adds, “Many of our franchisees tell us the dogs they foster end up coming back later as dog daycare customers. Everyone wins.” When Bobby first arrived at Hounds Town – Garden City, he was lacking confidence. He also had some trust issues with men. With a little TLC and training though, he could get over his fears. “We knew he would get adopted,” says Tracey-Shaver. “He is a sweet and gentle dog, and quite the ladies’ man! He had several girlfriends here over the past few months,” she says, smiling. The amazing team at Hounds Town worked with Bobby until he was ready to be adopted. That’s when Tracey-Shaver met Levittown resident Ronnie Stoll and her son, Brian. The Stolls had said goodbye to Petey, their beloved pitbull mix back in February. They had rescued him when he was just 2 ½ years old. He brought the family so much joy and love over the years, especially through a very difficult time. So after Petey passed away, and the family was struggling to heal after the devastating shock of losing Robert–Brian’s twin brother–Ronnie agreed to adopt a new pup. When she first met the boisterous Bobby, she knew it was “meant to be.” After all, he was a 2 ½ year-old pit-bull mix, just like Petey was when they first rescued him. And “Bobby” was the nickname that Robert’s friends used to call him.

After visiting Bobby at Hounds Town for several weeks, the Stolls officially adopted the handsome pup on October 13, Brian and Robert’s birthday. Colleen Tracey-Shaver and Erin Phillips were there to celebrate with the family. When asked if they had a hand in helping Bobby get adopted, Tracey-Shaver replied, “I hope so!” For his special day, they brought Bobby toys and treats for his new home and came armed with plenty of belly rubs. 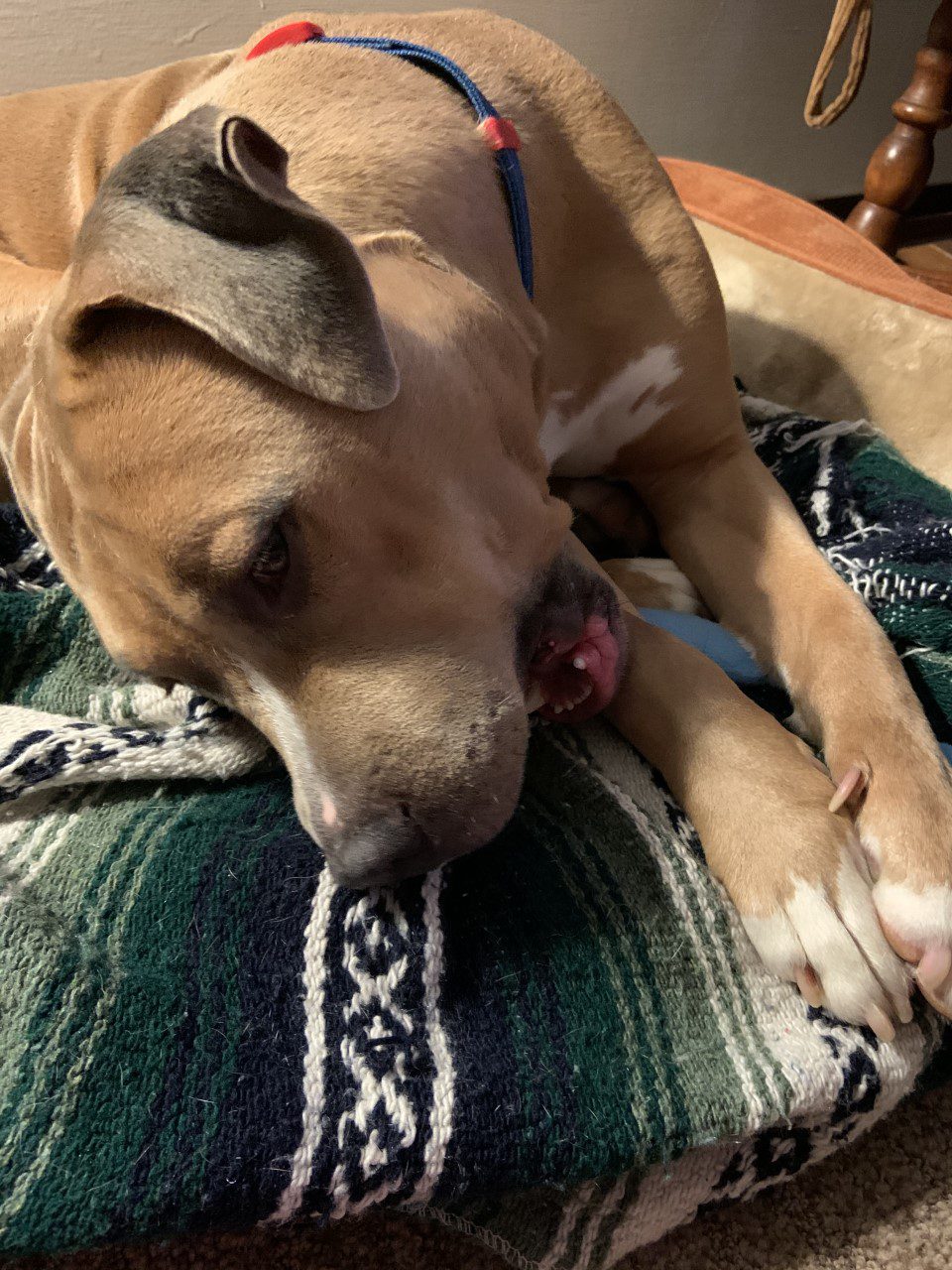 “Today could have been a very difficult day,” Ronnie says, referring to her sons’ birthday. “Colleen and Erin helped ease the pain and reinforce what a blessing Bobby is for us, and we are for him,” says Ronnie. “Plus Bobby NEVER forgot his foster moms. He was so excited to show them his new backyard!”  As for Colleen, the feeling is mutual. “As soon as we met Ronnie and Brian, we cried bittersweet tears because we knew Bobby had found his furever home!” she says.